This chick duo has done multiple shoots together before so it was a breeze (like always) to work with them.  Since Halloween is coming up, I thought, “what the hell, I should plan a themed shoot!”  The last themed shoot I did, which was back in 2013, was a “Christmas” themed shoot with Janis True when she first came down to Hawaii for one of the car shows.  You can find that set on my flickr.  Ever since then, I haven’t pushed for any other themed shoots. 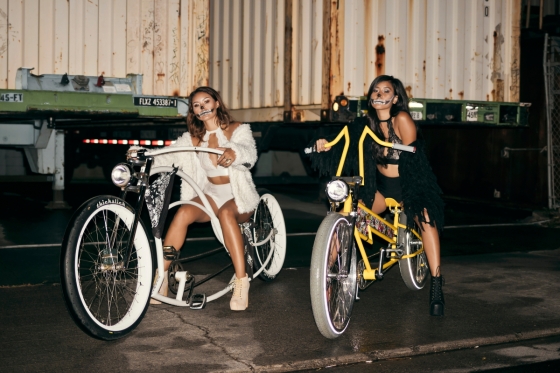 This shoot wasn’t even supposed to happen if Kerah didn’t bring up the idea because originally I had contacted her on a totally different idea.  I won’t give away the details of that one because it might end up happening one day so keep a look out.  But due to our conflicting schedules, we couldn’t meet eye to eye, so it got pushed back.  Originally, I tried scheduling the shoot before leaving to a trip to Bali in September (you can find that post here in my journal), but the date I chose, Kerah already had a shoot reserved for that day, so she suggests pushing it back to October.  Then she also brings up the idea that we should do a “holiday” one, so I thought, “why not shoot a Halloween one?!”  I showed her an idea I had in mind consisting of that “gangster clown girl” make up that basically every girl has done before, with the setting on the streets at night, with a low rider bike, with the concept of scary, gritty and sexy all at the same time.  The idea sounded good in my head and definitely would match the “Halloween” vibe.  Kerah was down for the idea except for the make up part lol.  She was against that since everyone had done that type of make up already but reassured that she’d think of something else to keep with the idea I had, which she’s pretty good at too lol….ideas. 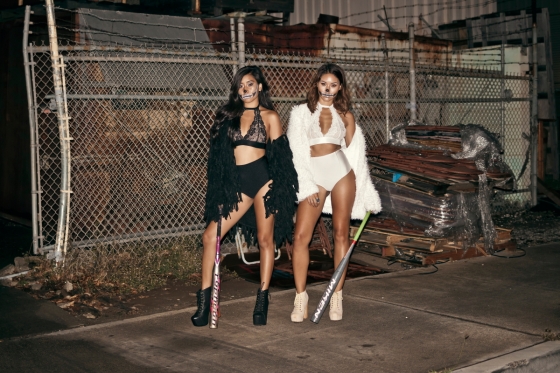 A few days later…boom…she hits me with a DM of her bright idea!  So originally it was just supposed to be her, but she suggested we did the shoot with 2 people instead, and who else would pair better with Kerah other than Michaela?!  The outfits were already planned too so everything was on a roll.  Come shoot day, I still had no idea what their make up would look like since my idea got thrown out the window lol.  But as soon as Kerah got her make up done, I asked for her to send me a pic to see what we would be working with and I have to say the make up matched with the whole theme.  It still had a touch of “clown” from the make up on their nose, or maybe they were supposed to be like a skeleton nose or something?  Lol I’m not entirely sure.  Their mouths were painted to look like some scary ass sharp teeth and with their outfits, the props, and bikes in the picture, it was definitely exactly what I had in mind.

This is basically what we turned out that scary night.  Well there wasn’t anything scary about that night lol.  Just trying to keep the Halloween vibe going.  Bikes were loaned from The Others B.C.  Shouts to them for letting us shoot with the bikes!  The crew shooting that night as always was @bs.vid, @kalenkeahi, and @jaysen_ilac.  Shouts to the team for always holding it down!  Also shouts to the 2 main important ones who made the shoot possible, @keeeraah & @michaelaspaulding, although the weather sucked that night because it kept raining every so often, but we still managed to get this one done!  Happy Halloween everybody! 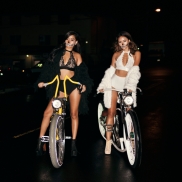 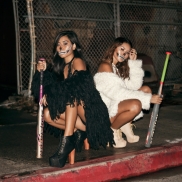 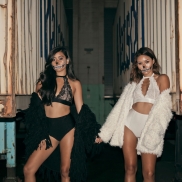 Wanna see past work the crew and I did with these 2?  You can find it in my RECENT WORK under Kerah or Michaela.

Also, wanna collab on something or book a shoot?  You can CONTACT me through here or on any of my social media.  Don’t forget to FOLLOW me if you’re a member on wordpress or SUBSCRIBE easily by entering your email address to stay up to date and be the first to receive any new post I publish in the future!  Be sure to also follow us on social media with the links provided.